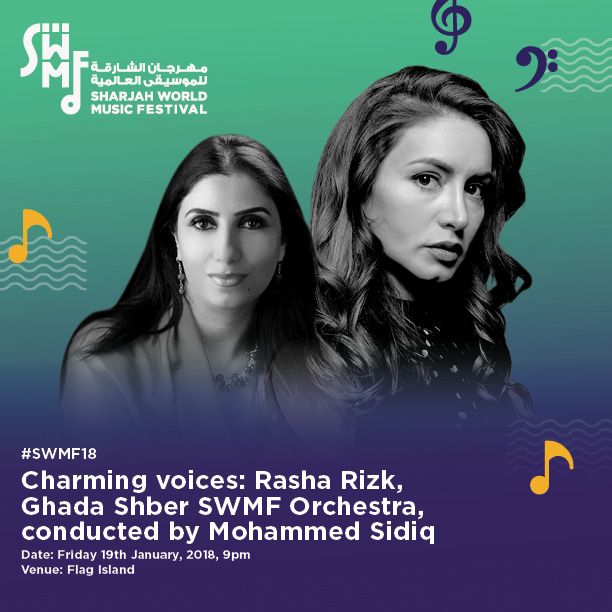 “The sublime and charismatic voice of Racha Rizk is the living witness of her musical travels, and her talent as well as her exceptional passion that let her explore different worlds, with all their music, with ease and grace. An artist, an interpreter of Classical and contemporary music, she is also a songwriter and composer of a great talent.”Rizk wrote, composed and arranged two remarkable albums Beitna 2007 and El Lebeh 2014. And through their creation, their lyrics she demonstrated her musical taste and identity.  2002 she graduated from the opera department in the High Institute of Music of Damascus, after five years of successful studies with her two opera professors.With her jazz band Itar Shameh, Racha gave many concerts in many Syrian cities as well as Beirut, Amman, Doha, and Dubai. And she opened with the Dutch Jazz pianist Michiel Bortslab, for Dianne Reeves in Doha’s North Sea Jazz Festival.Ghada Shber holds a Ph.D. in music science and a diploma in Arabic singing. She was well-known for her popular traditional Middle Eastern songs, ancient Syriac chants, and Maronite hymnsHer CD “Mowachahat” won two international awards for best performance and best work. She participated in several television programs, the latest was “The Voice” Ghada Shber has won several international and Arab awards, including the Arab Song Award in Egypt 1997. Ghada Shber will perform on the Flag Island to express herself through her songs, accompanied by the Sharjah World Music Festival Orchestra led by Maestro Mohamed Osman Sidiq
Date:             Friday 19January 2018
Time:               9:00 p.m.
Venue:           Flag Island  Amphitheatre